Every legitimate sport and endeavor has a Hall of Fame. Now lawn mower racing takes its’ rightful place along such noble American pastimes as baseball, country music, motorcycle racing, pinball, juggling, trivia and quilting with a place to honor ingenuity and mowtivation. —Bruce Kaufman, Founder and President of USLMRA 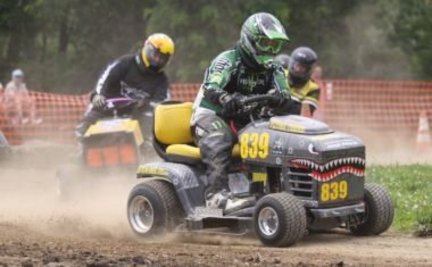 The Organizing Committee of the Twelve Mile 500 in Twelve Mile, Indiana

The Twelve Mile 500 is the home of America’s oldest organized riding lawn mower race.  Founded in 1963 and hosted by the Twelve Mile Lions Club, the annual mow down takes place on July 4th each year.  33 mowers run 60 laps around a 1/4 mile track covering a distance of 15 miles, a bit longer than the original distance of 48 laps – twelve miles – due to increased speed in recent years. 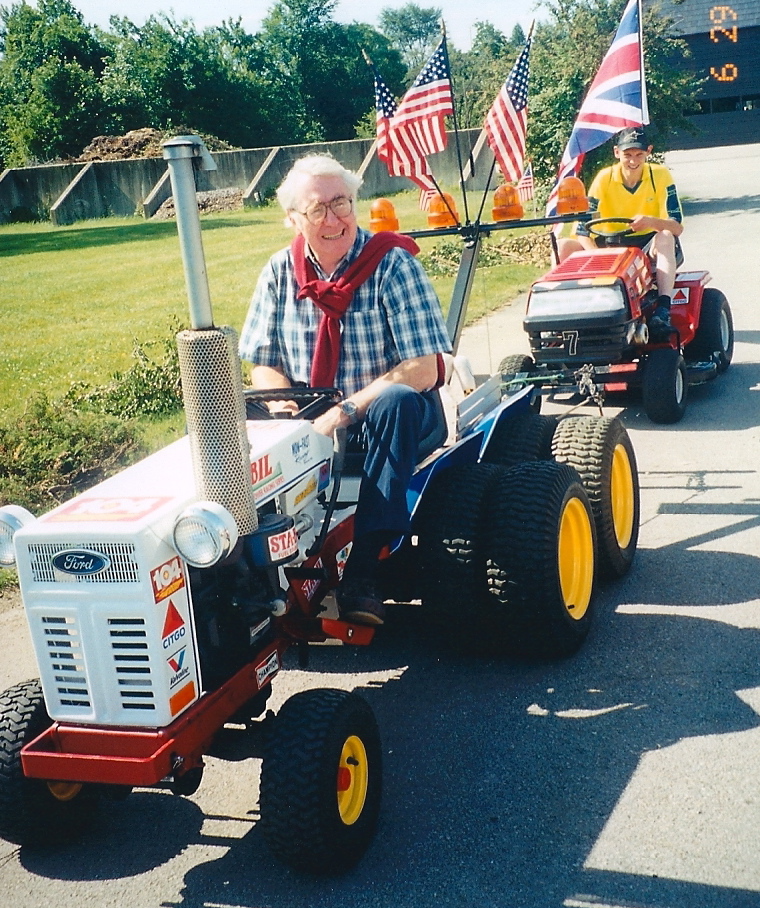 Founder and General Secretary of the British Lawn Mower Racing Association (BLMRA), founded in 1973 at the Cricketers Arms in Wisborough Green, West Sussex.  Gavin, an Irishman who had raced and rallied cars across the world, became disillusioned with the increasing costs of motorsport.  Whilst downing their pints in the village pub, Gavin and a group of locals looked across the village green to see the green keeper mowing the cricket patch. They realized that everyone had a lawn mower in their garden shed, so a Championship was held in a local farmer’s field.  About 80 competitors turned up for what turned out to be a very successful event and the formation of the BLMRA.  The BLMRA still sticks to its origins as a non-profit organization (any profits are given to charities or good causes) while providing well organized and inexpensive motor sport with a strong social atmosphere. 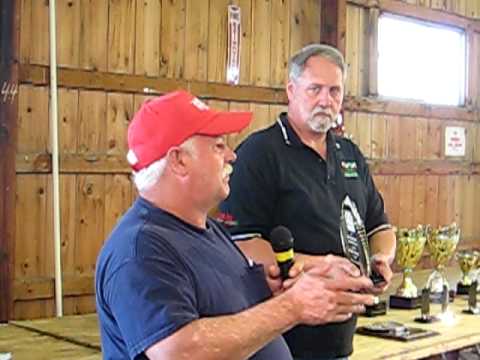 The first member of the USLMRA heeded the call to sod slinging glory on April 1, 1992, the birthday of national lawn mower race sanctioning in the United States.  “Racing Ray” tore up the turf from 1992-2001, claiming BP Class Points Championships on his mower Sodzilla 1995-1997.  “Racing Ray” served as Chief Technical Inspector, race course builder, rule maker and friend to lawn mower racers far and wide.  “I like lawn mower racing because it’s fun and affordable,” said Ray in 1997.  “Come to think of it, I like anything that is fun and affordable, that’s why I gave up my marriage, but I’m still racing lawn mowers.” 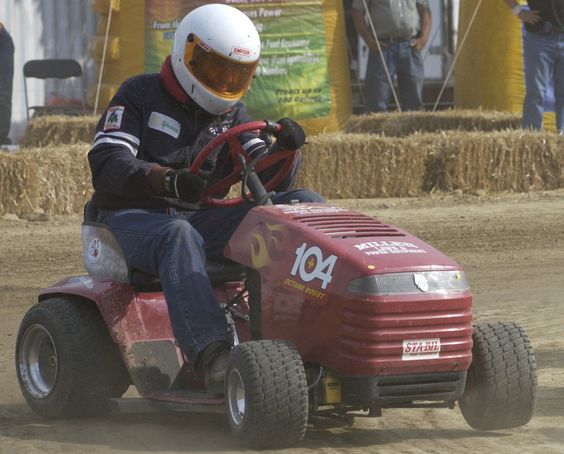 The only USLMRA member to compete in every STA-BIL Nationals since 1992.  The “Boogie Woogie Man” is a multi-year racing champion and is a Charter USLMRA Member.  His record of consecutive starts in the annual STA-BIL Nationals is unmatched.   Miller won the 1st BP Class Championship at the 1992 STA-BIL Nationals and the Factory Experimental Championship in 1993.  In 2008 he took 2nd place in the STA-BIL Challenge of Champions Race.  “I’ve seen the growth of the USLMRA since the first race,” said Miller.  “It amazes me to see how this sport has grown so fast and how it has become part of American culture.  I’ve stayed competitive over the years, and although I’m getting older, I’ve still got my MOWJo!”

His mower, The Turfinator, was featured on the hit TV sitcom Home Improvement for the famous jet-powered lawn mower race pitting Tim Allen vs. Bob Vila.   Smolecki joined the USLMRA in 1992, raced until 2000, served on the Rules Committee and as Technical Director and raced in the legendary British Lawn Mower Racing Association 12-Hour Race where he was honored as the first American to wave the checkered flag (1999). 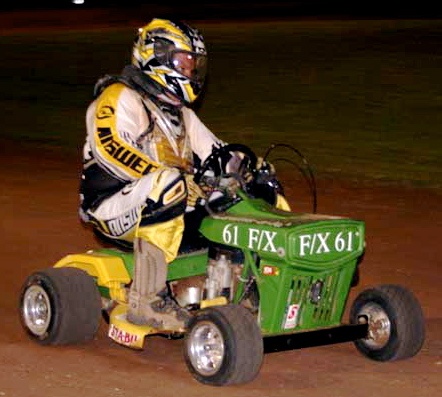 As a member of the USLMRA Steering Committee, Past President of the Lone Star Mower Racing Association (LSMRA) and the nations’ first “Mow Ambassador,” “Sir Lawns-A-Lot” epitomizes the spirit and unique culture of lawn mower racing.  Also known as John Deere Nelson, John competed in five racing classes from 2001-2010. John still loves to show off in his John Deere 210, 14-foot, 5-engine machine he calls “Mow Longer.” 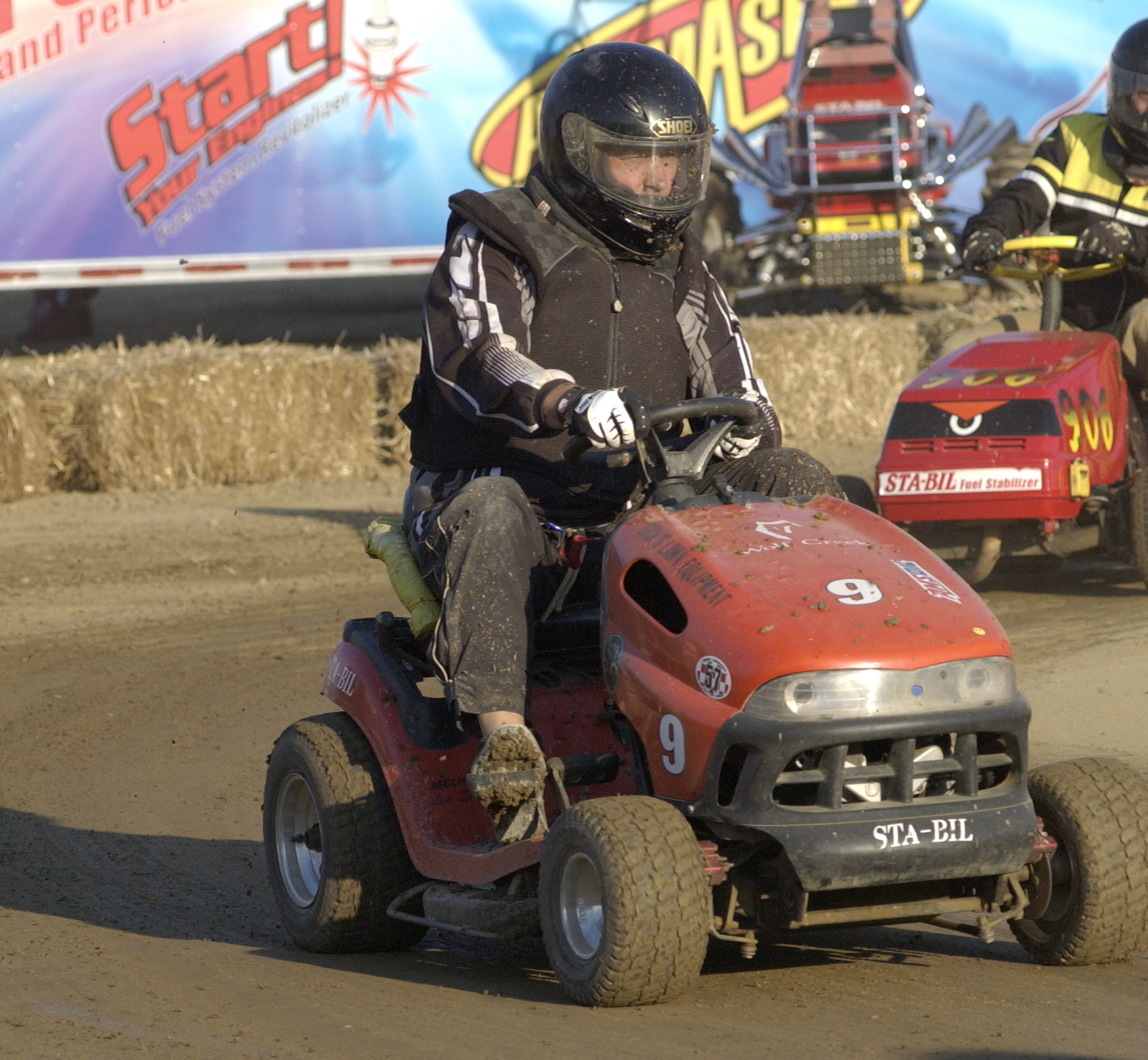 Dr. Art Neavill is beloved for his spirit, love of competition and eagerness to help fellow racers. Just before his retirement from the Michigan public school system, Art became a lawn mower racer, touring the country with his son-in-law and wife by his side, while intermittently battling cancer.  Lawn mower racers across the country have benefitted from Art’s generosity.  Be it a spare part, extra engine or entire lawn mower, if Dr. Art is in the pits, what’s his is yours. 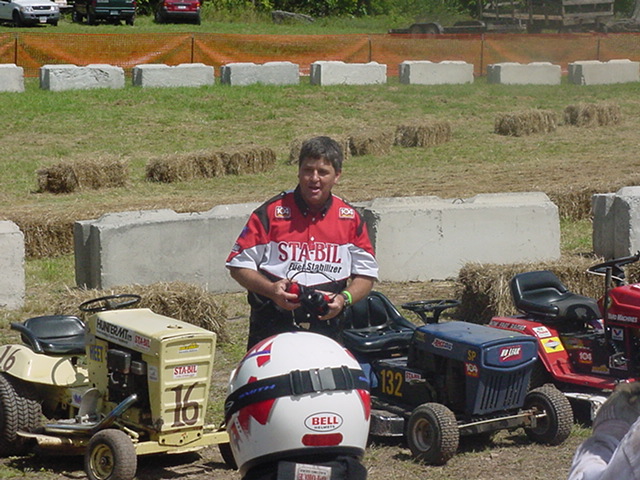 The late Charles Powell was USLMRA VP of Operations, LSMRA Founding President, Winner of the 2005 Pain in the Butt Award and simply, Mr. Mowjangles.  He was a MOWtivated racer, chapter president and race steward. The annual USLMRA Charles Powell Mr. Mowjangles Award was named in his honor. 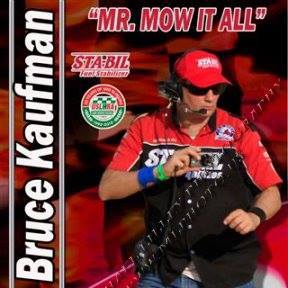 Bruce Kaufman, Mr. “Mow It All”

As Founder and President of the USLMRA, Bruce Kaufman of Northbrook, Illinois is on the “cutting edge” of American motorsports and has been kicking grass since Day One. With tongue planted firmly in cheek, the man known as “Mr. Mow-It-All” leads the USLMRA, the nations’ oldest and largest national lawn mower racing sanctioning body, and is responsible for association management, event and TV production, media relations, marketing, sponsorship and finance. He also serves as TV color commentator on the Fox Sports Net “Race Freaks” Lawn Mower Racing telecasts, where his “Mowtivation” is on full display. 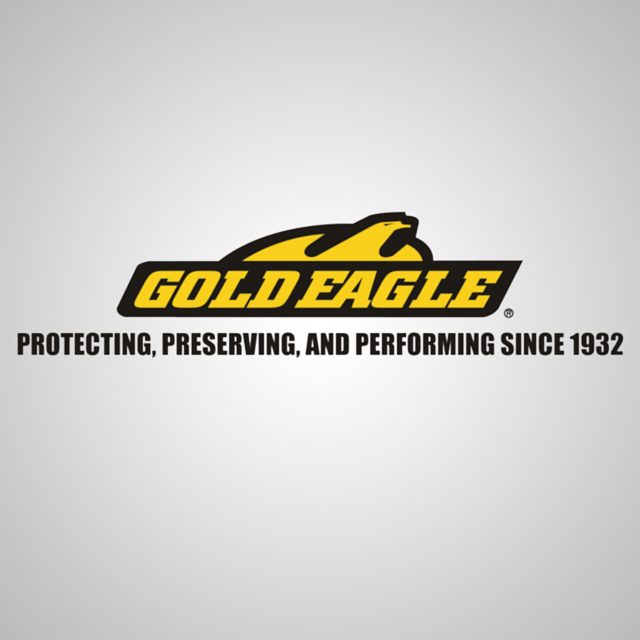 In 1992, Chicago-based Gold Eagle® Co. brought lawn mower racing from England to America as a promotion for STA-BIL®, America’s top selling fuel stabilizer. With the support of the British Lawn Mower Racing Association, Gold Eagle® Co. founded the USLMRA to sanction and present organized lawn mower races for fairs, towns and non-profit organizations across the USA. With one STA-BIL National Championship race in 1992, the STA-BIL Lawn & Garden Mower Racing Series has expanded to an annual 20-race circuit while the USLMRA sanctions 50 Chapters and Clubs nationwide. Gold Eagle® Co.’s 20 years of support is one of the longest consecutive sponsorships in all of American motorsports. Gold Eagle® Co. and the USLMRA have won numerous awards including accolades from Brandweek Magazine, The Publicity Club of Chicago, The International Festivals and Events Association, Inside PR magazine and the Public Relations Society of America. 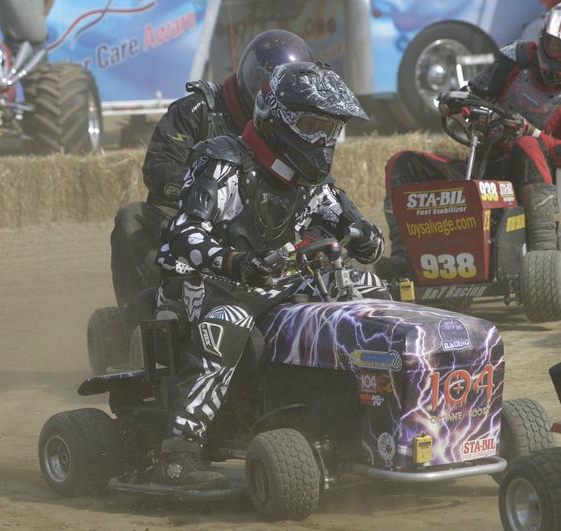 21 years ago Kevin Penne was a spectator at the inaugural STA-BIL Nationals in Grayslake, Illinois on Sept. 5, 1992 when he realized he was on the wrong side of the fence. By the following year he built his first racing mower and began lawn mower racing career, which has seen him become one of the most winning drivers in STA-BIL Racing history. “Cooter” is a pioneer of many the innovations used in the sport today. He designs and builds his own racing engines and chassis, is a 12-time STA-BIL Series National Champion, holds numerous track records and has been featured on Discovery Channel, ESPN2, Fox Sports Net and many TV news programs. Penne has also been banned at every horse track in Ohio. 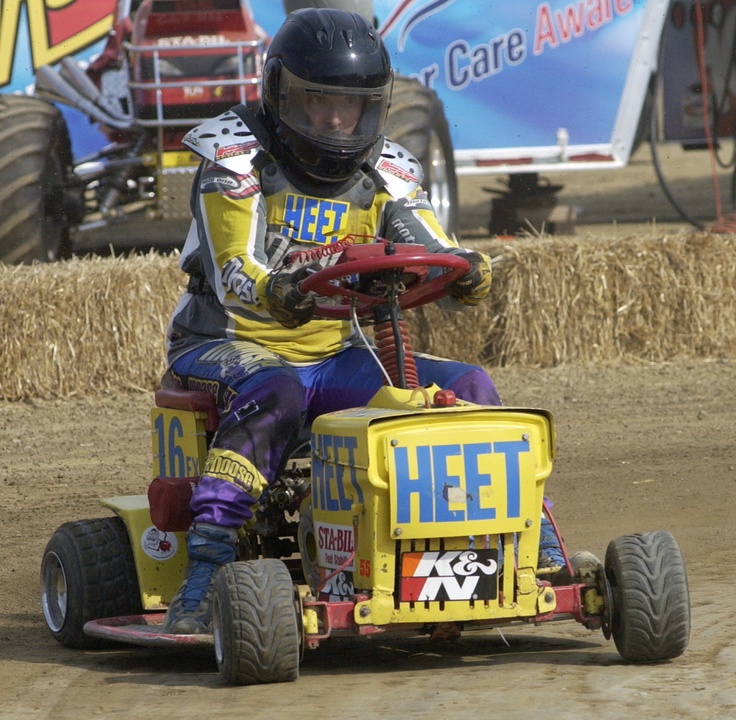 Like Penne, Mike Miller was also a spectator at the first STA-BIL Nationals in 1992 and also knew he had to build a mower and compete. In 1993 Miller met Penne at their first race and one of the longest-lasting friendships in the USLMRA was formed, with “Hedge Hog” driving his 1968 T.S. Rugg to STA-BIL National Championships in 1996, 2005 and 2007. 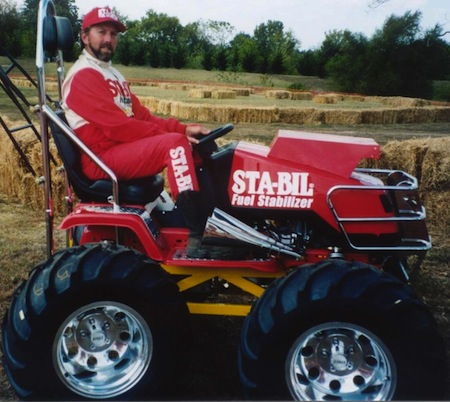 Bobby Cleveland, aka STA-BIL’s Engine Answerman, hails from Locust Grove, Georgia, where he’s always loved to ride motorcycles, race lawn mowers, build hot rods and tinker in the garage. His passion for motors and what makes them work runs as deep as his appetite for Southern BBQ, sweet tea and being on the road.Bobby is one of the most decorated Lawn Mower Racing Champions in the history of the STA-BIL National Lawn Mower Racing Series, having won more than 75 First Place victories and taken 9 STA-BIL Series National Championships. He’s also the World Land Speed Record on a Lawn Mower, and is the builder of World’s First “Monster Mower” and the World Record Holder for Monster Mower Jumping! 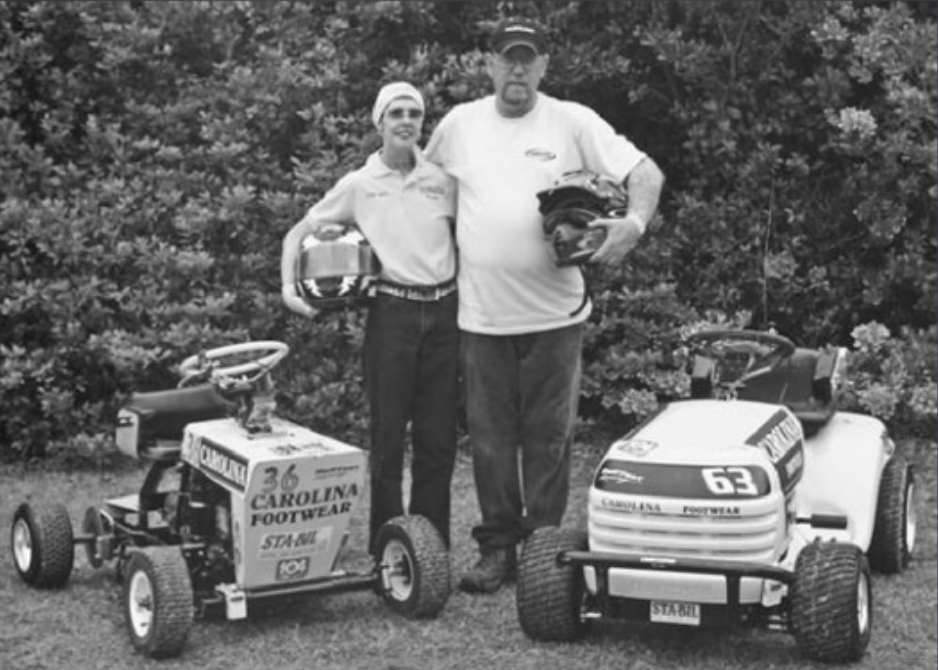 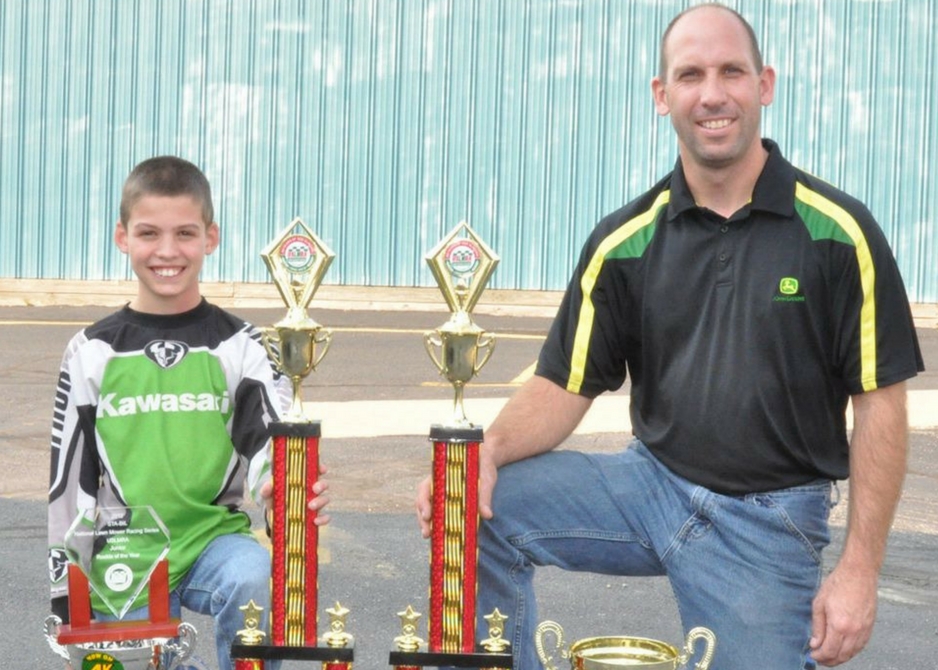 USLMRA Vice President, and Director of Timing & Scoring, Kerry Evans has served the USLMRA for 18 years as Race Director, Engine Builder, Tech Advisor and “Mow To Guy.” Based in Wilmer, AL, Evans runs “Mow South,” the USLMRA’s southern office and serves as an advisor to the Dixie Outlaws, one of the founding USLMRA local chapters.

USLMRA National Chief Steward and Technical Director, Manny Torres is responsible for racer safety, rules writing and enforcement and race day operations. Based in Port Deposit, Maryland, Torres has served the USLMRA since 2002. He is a master mechanic, engine builder and racing champion. 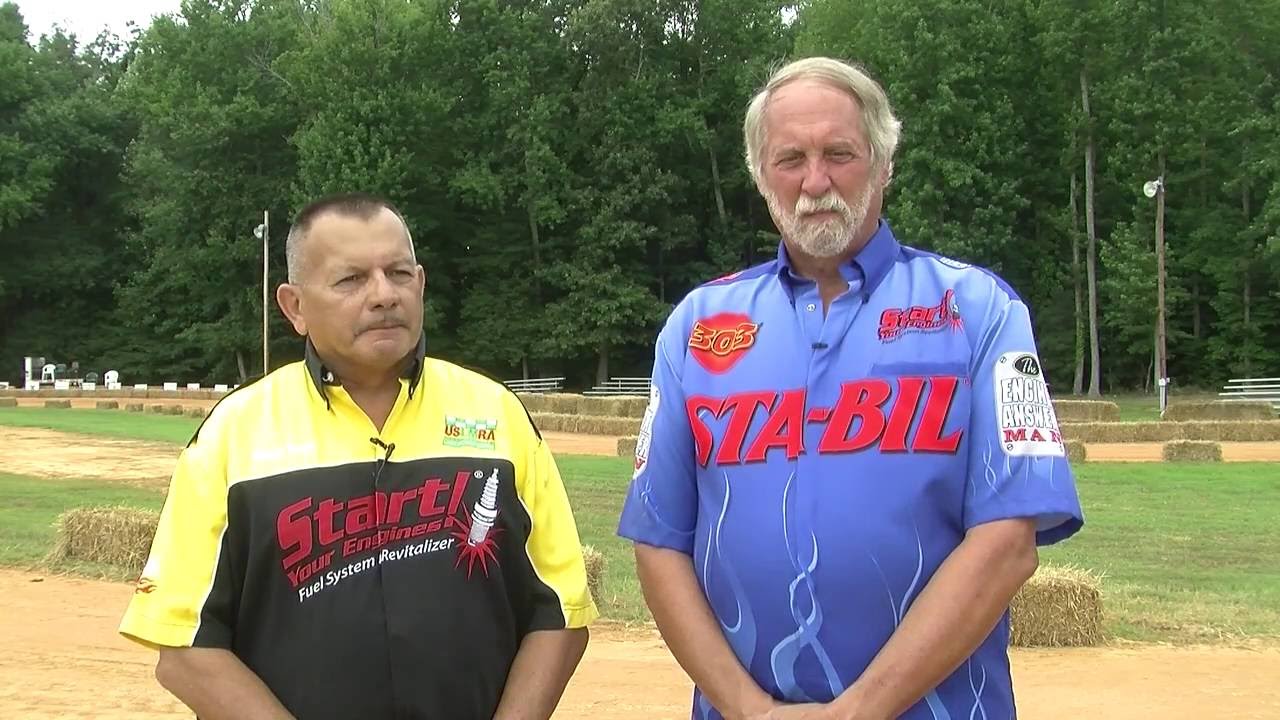