MOWklahoma… Oh What A Ride!

MOWklahoma… Oh What A Ride!

The O.K. Mower Racing club and the McDonald family were set to host the Midwest Mowfest in Claremore, OK on Friday, June 21 & Saturday, June 22, 2019. These guys have been battling monstrous amounts of rain all summer, much like many of us across the country have. Their track has been fully submerged in water, washed out, and just simply put through the wringer this year. The McDonald family have all worked long tiring hours to prepare their track for us to come. They did a fantastic job with what they had! Hats off to Harold, Stephanie, Chandie, Monte, Sara, and the local guys and gals who pitched in to help them make this event a success. Thank you all for being so welcoming and willing to help all who stepped foot on your lot this past weekend. 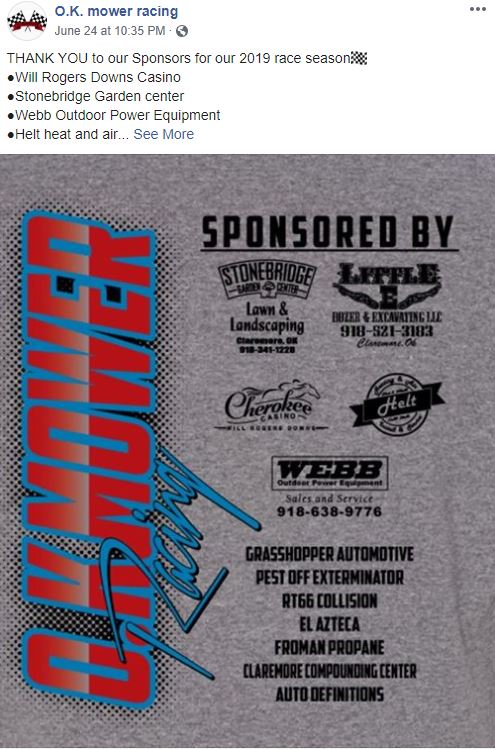 Friday was race day, Day 1.  We began the day with approximately 80 racers raring to go. It was extremely windy in Claremore which posed an issue at the registration table and also caused the track to dry out faster than normal. The track was also bumpy from the recent washouts, but it came around more as the day went on, and Mr. Harold and crew did not stop working on it the entire weekend. There were several large classes that had to be split and some racers had to race their way into the main event. The CP class had 13 entries, there would not be a consolation race for this class, the GP-S had 15 entries, and the FX-S class had 15 entries. There was lots of racing going on between all of these classes! Congrats to all of the racers from near and far who battled the heat, the track, and other competitors to become victorious. Brooklynne See: J/P, Colby Pate: A/P, G/P-K: Justin Wyant, Chris Vanmaastricht: I-Mow, Marcel Dupepe: G/P-S, Tom Ruo: C/P, Jason Brown: G/P-T, Colten Miller: B/P, Mike Enos: F/X-S, Derrick Robinson: F/X-T We would like to thank our longtime sponsor K&N Air Filters for the awesome hats that were provided to Friday’s winners!

We finished the night with celebratory tacos and garbage can chips provided by the O.K. Mower Racing Club, and they were amazing! Now, you are thinking garbage can chips?! Yes, it’s exactly what you’re thinking: the local Mexican eatery, El Azteca sponsors the race club throughout the year. They sent over a 30-gallon plastic garbage can full of chips! (It was clean, and only used for chip purposes!) The chips were so convenient, a few of us even pulled up chairs Saturday for a snack between races and shared the garbage can chips. It was great!

Saturday was also a bittersweet day. Just a couple weeks before the big race, long time OK Mower Racing supporters Preston and Richard Bechtel lost their mom, and Mr. Steve lost his loving wife, Mrs. Robyn to cancer. We met this family a few years ago, and have all become pretty great friends along the way. We were all heartbroken to learn of Mrs. Robyn’s diagnosis. The family had shirts and decals made to help support her during this battle. I purchased some for myself and my kids. We wear them often as a reminder of those battling daily. I made sure that before we left for the weekend away that I packed these shirts. I talked to Preston on Friday and told him that I deemed Saturday Mrs. Robyn day, that we would wear our shirts in honor of her. Richard couldn’t attend due to work obligations, but we thought of him throughout the weekend. We had a Mow Down Cancer picture in memory of Mrs. Robyn. She may not be with us physically, but she showed up in spirit all weekend. I’m certain she was riding right along with Preston in his races, pushing him to do his very best! 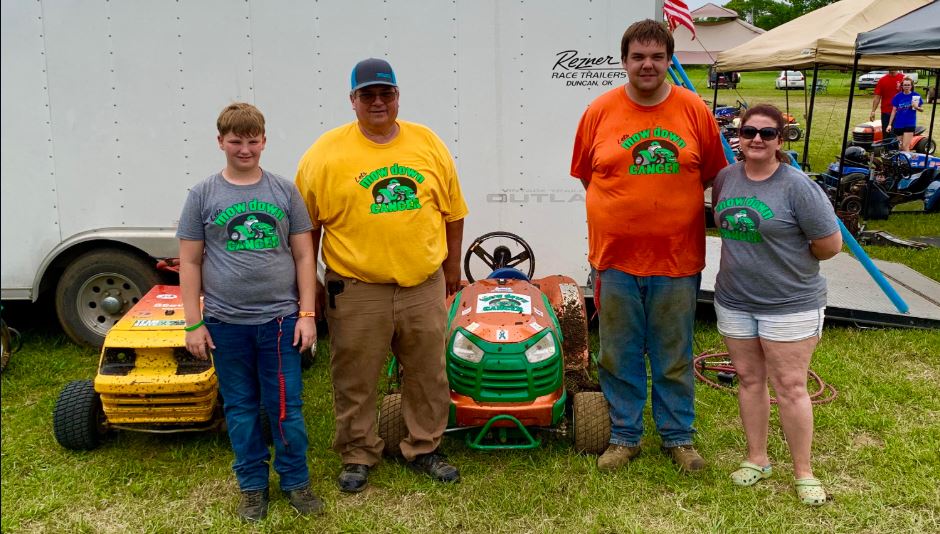 Saturday, Race Day 2 was filled with a lot less wind, but much more heat! I found myself looking for shade throughout the day. The track was so much better Saturday, as Mr. Harold and crew stayed late into the night digging and repairing the track in the worst spots. We did see on the radar that there were potential storms brewing in the area for that afternoon. We completed heat races without a hitch. We started in on mains as the sky grew darker. Casino security pulled into the lot to inform us that storms were a short distance away. It was decided to cut mains down to 10 laps, in hopes that we could make it go. We had made it halfway through the mains when the sky let the rainfall. Thankfully, it wasn’t a complete washout kind of rain. Honestly, it was what we needed to cool us off. After the rain lifted, we were presented with a beautiful rainbow on the back side of the track. It was time to finish the races off! All of the racers did a fantastic job of putting on a show in Claremore! Thank you all and congratulations to the day 2 winners! Brooklynne See: J/P, Colby Pate: A/P, Colby Pate: G/P-K, Chris Vanmaastricht: I-Mow, Marcel Dupepe: G/P-S, Tom Ruo: C/P, Jason Brown: G/P-T, Alex Stella: B/P, Mike Enos: F/X-S, Derrick Robinson: F/X-T We would like to thank our amazing sponsor Slime for the awesome goodies provided to Saturday’s winners, and for the extra goodies that were provided to all racers! It was a great weekend in MOWklahoma, we managed to outrun the rain, as it set in as everyone left the track Saturday night, and did ease up until late Sunday. When racers went by to retrieve their trailers Sunday morning, they found the track completely submerged in water!

We would like to extend a huge, heartfelt thank you to the McDonald family, and the racers and community who helped them put on this show for all to enjoy! It takes so much work and manpower to produce a race of this size, my hat is off to them for pulling it off seamlessly! Thanks for having us guys, we hope to do it again soon! We would also like to thank Kerry Evans, EOP Timing & Scoring, Miller Tire Co., K&N Filters, Slime Tire Sealant, STA-BIL, a Gold Eagle Company