The first lawn mower race of the 2019 STA-BIL racing season is officially in the books! The Cutting Edge United States Lawn Mower Racing Association’s Alpharetta, Georgia Race was an amazing show. The race was scheduled for Friday, May 31 and Saturday, June 1. The Alpharetta Convention and Visitor’s Bureau along with Anna Mikell had worked closely with USLMRA President, Kerry Evans, for almost two years to make this show happen. The event was held at the Wills Park Equestrian Center. The facilities were very nice. There was a large covered arena that the mowers would have a track underneath. This was exciting; it meant that we would race rain or shine. With no threat of rain in sight in recent weeks, it had been smoldering hot in Georgia last week, so the cover was a blessing in disguise. The track cover provided nice shade and a wonderful breeze. The event crew provided us with a nice sized dirt track with long straightaways and tight turns. There was an onsite campground and bath house on the property, which was really nice for those that brought their campers. The park also had a permanent concession stand on site to keep the racers fed and hydrated.

Race planning began months ago for many. Mr. Les Pantry from England, World Ambassador for Lawn Mower racing, saw the schedule as it went up, and he quickly started planning a trip. He spoke with Kerry, and the two of them decided Alpharetta would be a great location for him to come in to race at this year. He asked us if he could drive a mower, and we, of course, told him he could drive a GP. He decided that he wanted to have a go on an FXT, Derrick told Mr. Les that he could take his out for a few laps. Somehow though, Mr. Les found himself talking to Bobby Cleveland about the FXT. Bobby then offered Mr. Les to race his FXT mower as well. Everything was sorted and ready; the flight, hotel, and rental car were booked. Mr. Les was ready to MOW, and MOW he did! Congratulations on your trophy medals for your classes! Racers and staff began arriving in Alpharetta on Wednesday in preparation for the race. Our crew wasn’t scheduled to go in until Thursday evening due to school and work. Our crew’s trip was eventful, to say the least: nightmarish if you will. Most of you have now heard about that, so I will not revisit that here. We are all just thankful everyone made it to race in one piece, safe and unharmed. When I came in to help Kerry Friday morning, I was able to see all of my racing family and even meet some new members. It made my day seeing everyone that I hadn’t seen in what felt like forever. 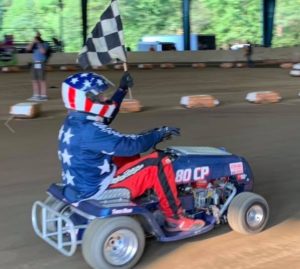 While at the registration table Friday morning, I was approached by a family that I had not met before. All were quite nice and very mannerly. They had a mower that they wanted to race, and were looking for help. They had never attended a USLMRA event before this one. I asked about their driver, he was 17-year-old Damion Pope from Georgia. He was a very quiet, but sweet young man who has Aspergers Syndrome. I had them fill out all required forms to race. We went to sign them in, but they didn’t know what class the mower should race in. I sent them with some fellow racers to figure out what his lawn mower was, then sent them to Manny over in tech to make sure that it would pass all of USLMRA’s race requirements. One of our racers, Mike Enos, saw the large family and knew how expensive it was going to be for Damion to race and all of the family to get into the pits for the weekend. So, Mike brought the family back to me after seeing Manny. Mike explained the situation, and gave me $25 to cover the expense of Damion’s USLMRA membership for the year to help ease the financial burden on the Pope family! These are the moments that make my heart go “pitter patter!”  These are the moments that I live for, and it absolutely made my entire day to be able to stand up there and give Mike a Spirit and Spark Award for the weekend for his never-ending generosity! There were many other notable moments throughout this weekend amongst our racers. Each one of our guys and girls have such giving hearts, and want to see the sport continue to grow. You all are truly amazing humans and I am so thankful that each one of your giving and gracious hearts have been placed in my life.

Our pit location was beside a walking trail in the park that many of the locals use. It allowed us to explain mower racing to many of the locals. I was asked many times about the mowers that both adults and kids can use. Since we have two of those now, I was able to explain. One mower belongs to our son Dylan, the other belongs to our extra son Justin. When Mr. Les was looking for a mower, he decided that he would ride Justin’s in the G/P class since he and Justin share the same race number, 12. So, that meant that Dylan’s mower would still be eligible to race the G/P class if another adult wanted to race. I received a message a few weeks ago from one of USLMRA’s old racers that has since went on to race dirt late models, Jamie J-Mow Maurice. My brothers actually bought Jamie’s last mower a few years ago. Jamie stated in his message that he wanted to come up and race a mower in Alpharetta since it was kind of close to him. He asked if we had a spare. I said I sure do, I have your old G/P that Dylan races now in the G/P-K class. So Jamie, wife Crystal, and all of those super cute Maurice kids came up to race with us because we loaned him our son’s mower! 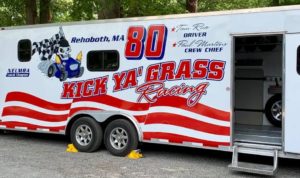 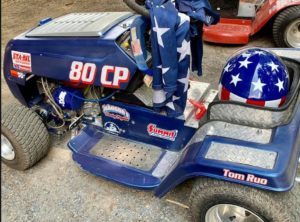 Each one of the locals that I spoke with were astonished that we would just let other people drive our mowers like that. I explained to them all that this is a family sport, and we, as mower racers are all one big family! Honestly, I was just elated to see Mr. Les and the Maurice clan. It felt like an honor for them to ask us for mowers to race. We really just want to see the sport grow, and by allowing the two of them to race, we grew our totals for the weekend as a whole, which in turn helped us put on an even better show in Awesome Alpharetta! This, my friends, is why we mow! 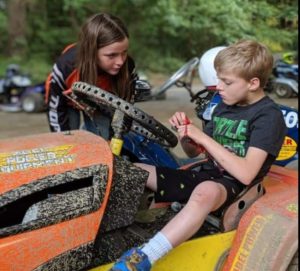 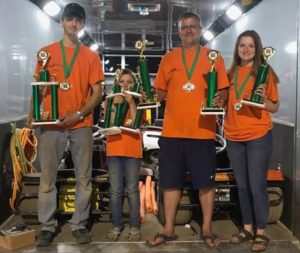 Now, let’s get down to some racing: it was action packed and super fast! The IMOW’s were even flying! The track had its ups and downs… seriously! LOL! So it seemed as though there was a different winner in the heats than in the mains in many classes due to the constant changing of the track. Gracie Enos of Iowa, Colby Pate of Florida, and Justin Wyant of South Carolina would sweep the weekend in their main races of the J/P, A/P, and G/P-K classes! Way to MOW kiddos, we are all very proud of you all! Marcel Dupepe of the Cajun Mower Racing Association swept the IMOW class all weekend. In the G/P-S class, Shane Shellnut of Georgia took the checkered on Friday while Jason Nutbrown of Ohio cinched it on Saturday. The C/P class would be won by Alex Stella of Michigan on Friday and Tom Ruo of Massachusetts on Saturday! In the G/P-T class, Shannon Pate of Florida would bring home the win both days. In the B/P class, Derrick Robinson of South Carolina would take the win Friday while Colten Miller of Iowa would take it home Saturday. In the FXS and FXT classes, both Jason Nutbrown and his FXS from Ohio and Derrick Robinson and his FXT from South Carolina seemed to be untouchable! Both MOWchines were flying, and both gentlemen drove their mowers straight into victory lane Friday and Saturday!

It was an awesome weekend of awesome racing in AWESOME ALPHARETTA! We hope to be able to return again next year, and many years to come.

Thank you to the Alpharetta Conventions and Visitors Bureau, Cutting Edge, STA-BIL, Gold Eagle Company, K&N Filters, Slime, and Miller Tire for making this race and this racing season possible! Thank you to the USLMRA for providing us with venues to race at each year!

For live video coverage and pictures from the weekend in Alpharetta, Georgia, check out Mow Racing Photography on Facebook.